On Thur April 21, whatever you had planned, cancel it.

You need to come to my double header show with Hannah Rose Platt at The Sound Lounge in Sutton, South London.

We are going to tear it up. I mean, look at us: we mean BUSINESS. 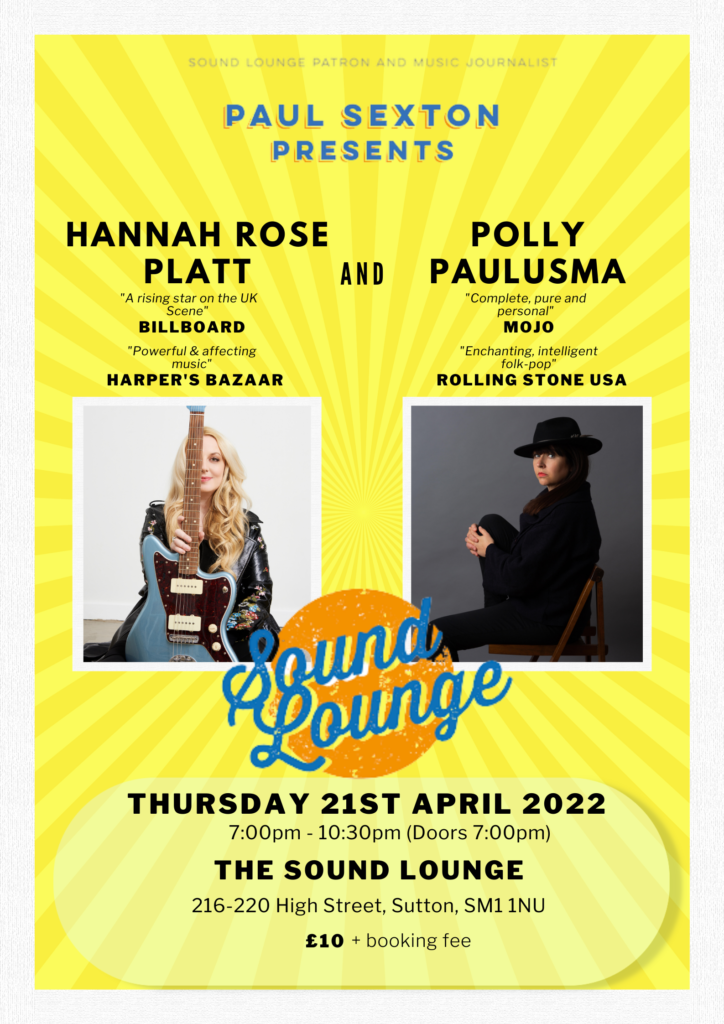 Well, this is it.

The Guardian/Observer **** – a ‘vibrant, insightful tribute’
BBC Radio 2 Folk Show – ‘intoxicating…. an impressive album that really deserves to be heard’
Folk Radio UK – ‘both a terrific traditional folk album and a fascinating insight into Carter’s creative process’
Shire Folk ‘Be in no doubt, Invisible Music is one of the landmark releases of the year, in this or any other genre’

Radio: I’ll be talking with Mark Radcliffe on the BBC Radio 2 Folk Show about the record on Wed 5 May between 9-10pm: please do tune in.

Hello everyone — I’m feeling cooped up and I’m missing you all. So I’ve decided I’m going to tour the world from my shed.

All performances will be beamed live on Youtube Live, and then archived to be watched again at patreon.com/pollypaulusma.

3 DAYS: 7:00pm - @pollypaulusma & @AnnieDressner will be at @GreenNote in #Camden on 5th Oct TICKETS: https://www.ticketweb.uk/event/polly-paulusma-annie-dressner-green-note-tickets/11691665

4 DAYS: 7:00pm - @pollypaulusma & @AnnieDressner will be at @railwaylive in #Winchester on 6th Oct TICKETS: https://www.railwayinn.pub/shows/polly-paulusma/

Thank you #Hull for a beautiful day. Now to @wbart

All set up and ready for a beautiful gig here @the

If you ask for an encore on this tour, this is wha

My new album is out today! I would be so honoured

Tonight! Last Live Tuesday! Join me in the shed

Thank you Folk Radio UK for this thoughtful close

Next week! This tour is happening! WOOP! Ticket

Rehearsals are afoot. Here's 'The Woods'. Come to

I'm making something very special for my patreons:

Shooting a mini-documentary today with my fabulous

I want to celebrate with you all the amazing singe

Newcastle means several things to me. Trying not t